RICHMOND, Va., Feb. 13, 2020 /PRNewswire/ — According to the Centers for Disease Control and Prevention, suicide is the tenth leading cause of death in the United States and the 11th leading cause of death in Virginia. On Thursday, February 20, advocates from the Virginia and National Capital Area Chapters of the American Foundation for Suicide Prevention (AFSP), the largest suicide prevention organization in the United States, will meet with lawmakers and urge their support of: SB 280 requiring the Bureau of Insurance to report annually on mental health parity; SB 245/HB 386 prohibiting licensed counselors from engaging in conversion therapy with minors; SB 569 requiring the development of a mental health mobile application; and HB 1063 officially decriminalizing suicide in the Commonwealth of Virginia. 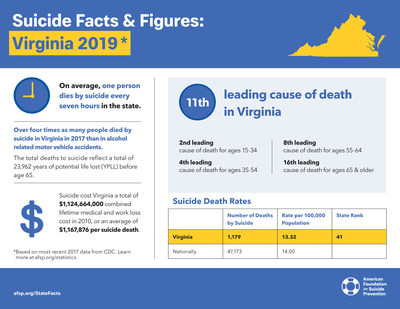 «In 2004, I lost my older brother, Timmy, to suicide. In the aftermath of our sudden loss, my family and I recognized that we needed to speak up to help eliminate the stigma and to advocate for better access to resources to prevent suicide. Today and every day, I advocate to save lives, to help survivors of suicide loss heal, to eliminate the stigma, to end suicide, and to honor the memory of my brother, Timmy,» said Haley Thompson, AFSP Virginia Chapter Board Member and Advocacy Committee Chair.

The AFSP Virginia Capitol Day is a special day for all who have a connection with or a personal story around the topic of suicide. Attendees will meet with their legislators to share their stories about why they participate in this advocacy effort, giving a human face to this important public health problem. Advocates hope that by sharing their stories, they will help lawmakers understand that investments in mental health and suicide prevention can save lives.

AFSP Virginia and AFSP National Capital Area advocates are part of a larger national movement of AFSP volunteer advocates who will visit state capitols across the United States in 2020 to bring best practices in suicide prevention to legislators and their staff. To learn more about AFSP’s advocacy efforts, visit here: https://afsp.org/our-work/advocacy/.

The American Foundation for Suicide Prevention is dedicated to saving lives and bringing hope to those affected by suicide. AFSP creates a culture that’s smart about mental health through education and community programs, develops suicide prevention through research and advocacy, and provides support for those affected by suicide. Led by CEO Robert Gebbia and headquartered in New York, with a Public Policy Office in Washington, D.C. AFSP has local chapters in all 50 states and the District of Columbia with programs and events nationwide. Learn more about AFSP in its latest Annual Report, and join the conversation on suicide prevention by following AFSP on Facebook, Twitter, Instagram, and YouTube.